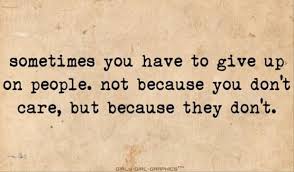 The saying goes ‘it only takes one bad apple to spoil the barrel’. Like many of us, I’ve come across my fair share of bad apples in my time. I’m speaking figuratively, of course, about the co-worker or team member whose mission in life is to infect those around them with their negativity.

I remember a few years ago, being in the midst of a major corporate restructure where I used to work, and being told very clearly by an external consultant, not to waste my time trying to motivate and support one member of staff. “He’s a bad apple” the consultant said, “don’t waste your time trying to motivate the 5% who aren’t interested, spend your time on the 95% who are”.

At the time, I remember feeling slightly relieved that I could let go, but also slightly challenged that I’d be turning my back on someone who might, just might, be capable of engaging with the restructure and of showing some positive team spirit.

Now I work as a coach, and have learned that a person is more than their behaviour. Let’s take the apple. Its skin is shiny and the flesh is sweet like all the other apples heading off to the barrel. Along the way, the apple is damaged somehow and its skin punctured; it turns a little sour and some juice leaks onto the other apples in the barrel, turning them rotten too. The original intention of the apple was to be part of a lovely barrel of sweet and juicy apples.

Events occur in life which have an impact on us. Some find it hard to overcome those events, and in time, they become defined by the events. That wasn’t their original intention, and actually there’s much more to them than that. The leadership challenge in this situation is to work with the person on what is driving their negative behaviour, rather than simply reacting to it, or attempting to isolate them (ie remove them from the barrel). What are they not telling you, what aren’t you seeing?

Ultimately, the consultant who advised me all those years ago is right. But only once you’ve appreciated that your bad apple is more than simply rotten, and you have given that person the opportunity to show that they are more than their behaviour.