The meaning of your communication 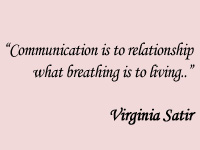 The meaning of your communication is the response that you get. One of the founding principles of NLP (neuro-linguistic programming). Like a lot of principles, on first sight, it’s something of an enigma.

Imagine the following: It’s the early 1990s and the UK is in the grip of a deep recession. You are a multi-millionaire businessman and you own a chain of High Street jewellers. When you started your business, it was a small family-run affair, and under your leadership it has become so successful that it is the go-to shop for buying jewellery on every high street. You are giving a speech to a bunch of high-powered businessmen one evening. It’s a speech you’ve given several times before, with success. In order to create rapport with your audience, you crack a few jokes, mainly at the expense of your own business. At one point you tell your audience that the reason your goods are sold so widely and in such quantity is because they are ‘total crap’.

The following day, a national tabloid runs a story about your speech, and includes some of the quotes of you poking fun at your own product. Your customers, who are the same group of people who buy this particular tabloid, and they are deeply offended. They feel mocked. So they stop buying your goods. And within a year you’ve lost your job and had to sell your company to save it from going bust.

You are Gerald Ratner, and this is a great example of how the communication was received very differently from it’s intention. He made the mistake of not considering the perspective of his audience. The responsibility for getting communication right lies with the communicator, not the receiver.

It’s true that about 70% of communication is non-verbal. The receiver hears your words, hears your tone, looks at your face, your body language, makes sense of the context of the conversation, and then removes and distorts bits of it in order to associate it with something similar they’ve experienced in the past and stored in their memories. In a split second. So thinking about the receiver’s perspective, how they might interpret your communication, is crucial.

Do you remember the first time you went overseas? I remember when I visited Paris for the first time as an adult. I was standing outside Sainte-Chappelle and watched an english speaker communicating with a gendarme. They spoke loudly, and in english, to try and make themselves understood. The gendarme responded in French, and at speed. The english speaker could not understand, so just shouted a bit more. A little while later, another person approached the gendarme and spoke to him in French – haltingly as French clearly wasn’t this person’s first language. The gendarme made every effort to be helpful and understood by the person making the enquiry. The enquirer had thought about the perspective of the receiver and adapted their communication accordingly.

Virginia Satir, noted psychologist and author, once said: ‘Communication is to relationship what breathing is to living.’

Are you being understood?