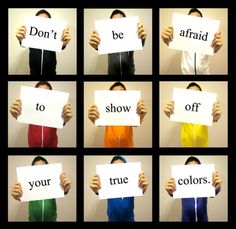 Have you ever considered how much effort goes into hiding your true colours, your true self? Imagine if that effort could be redirected towards something more useful?

A number of years ago now I worked with someone who had a very gruff exterior. This person was a key member of staff, was often the single point of contact for specific issues, and was someone that many of us did not like to approach unless we had to. And yet there were a few who would describe the person as a real softy. Really? I couldn’t see it.

Some years later we ended up working on a project together. To cut a long story short, our thought processes (and to some extent ourselves) were broken down before being rebuilt. Over the course of a month I got to know a small group of people very well indeed. By then, I’d already worked out my unapproachable colleague and learned that his exterior had been carefully crafted to protect him. After spending a month in the same room as him and other colleagues, so had the rest of them.

It became time for this person to let go of the past and move forward. He was absolutely strunned when we told him that we could all see straight through him, beyond his gruff exterior, to the true colours of the person underneath, and that we were all really rather fond of him. We watched his shoulders slump and his body deflate. And then we noticed that his posture relaxed, he began to smile and talk about his family, and it was as if his armour-plating melted away. He was never the same again. Just a better version of himself, and one where we could clearly see him for who he really was.

Have you ever come across anyone like that? Or have you noticed how much time you spend hiding what you really think or feel to the people who care about you? Keeping up a charade is really very tiring. It’s so much easier just to be you, 24/7 365.

When you want help to show off your rainbow, give me a shout.